Come and explore Cape Ann and find those places where Babsons have left their mark. They have been here for almost 400 years! You will find boulders in the oldest settlement in Gloucester,  a quarry at Babson Farm in the Halibut Point State Park in Rockport, a library dedicated to expectant mothers  in downtown Gloucester (the Isabel Babson Memorial Library), numerous Babson-related exhibits at the Cape Ann Museum and cemeteries full of markers for Babson ancestors. 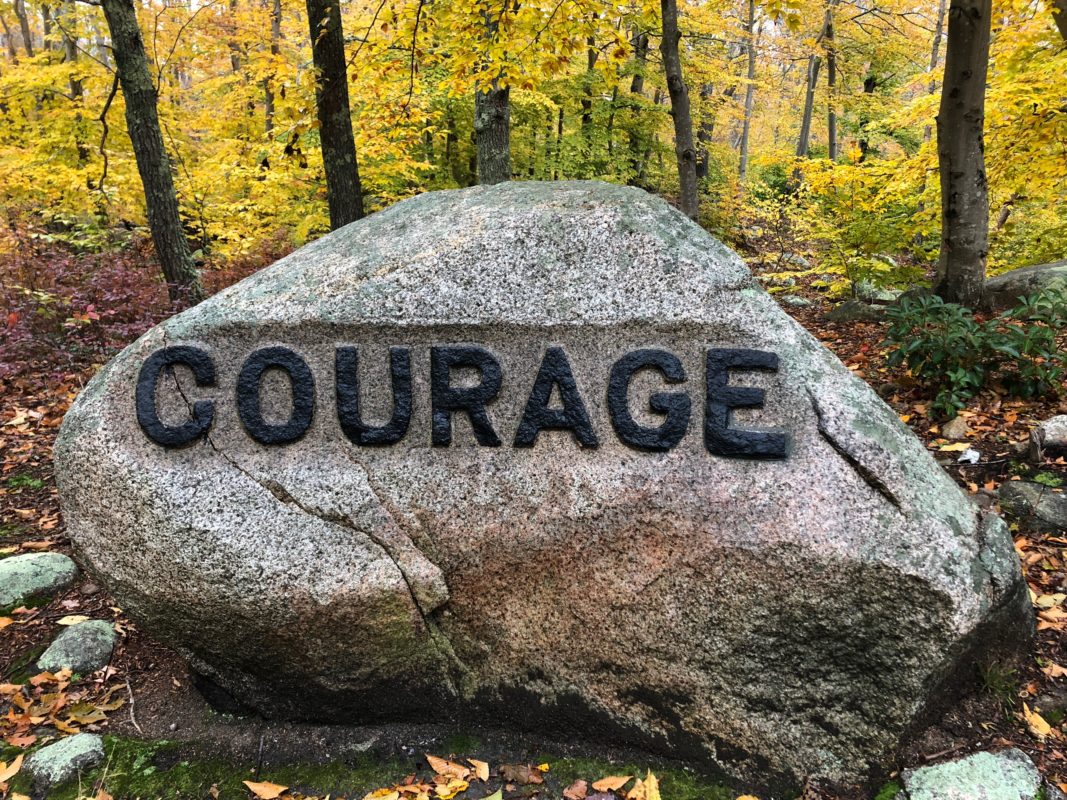 At the core of Cape Ann, you can walk through Dogtown to find a trail of boulders marked with mottos, as well as numbers indicating the locations of cellars and foundations from the colonial history when the area was the Commons. Roger Babson purchased much of the land that is now Dogtown and donated it to the City of Gloucester for protection as a park and watershed of the Babson Reservoir. During the Depression, he hired stonecutters to carve mottos such as Truth, Help Mother and Get A Job. More on the history of Dogtown can be found essexheritage.org and northshore.edu. There are a variety of trail heads for accessing Dogtown, two are described on thedacrons.com which also includes a link to a trail map.

“Babson Babson Killed the Bear, With His Knife I do Declare”*

On Bearskin Neck, above the entrance to The Pewter Shop, is a painting that tells the story of how Bearskin Neck got its name. Ebenezer Babson was said to have seen a bear attack his nephew. “He immediately attacked the bear to get his attention away from the child, but having no gun he permitted the bear to follow him into the water. There, after a terrific struggle, Ebenezer killed the bear with a fish knife. He then brought the bear onto the shore, skinned him, and spread the skin on the rocks to dry.”  Bearskin Neck is now the heart of downtown Rockport. Read the The Legend of the Bear and the Sign (PDF) to learn more.

More info on visiting is available on essexheritage.org and bearskinneck.net.

*Quote from John J. Babson, History of the Town of Gloucester Cape Ann Including the Town of Rockport (Massachusetts: Proctor Brothers, 1860) and The Witham Family History 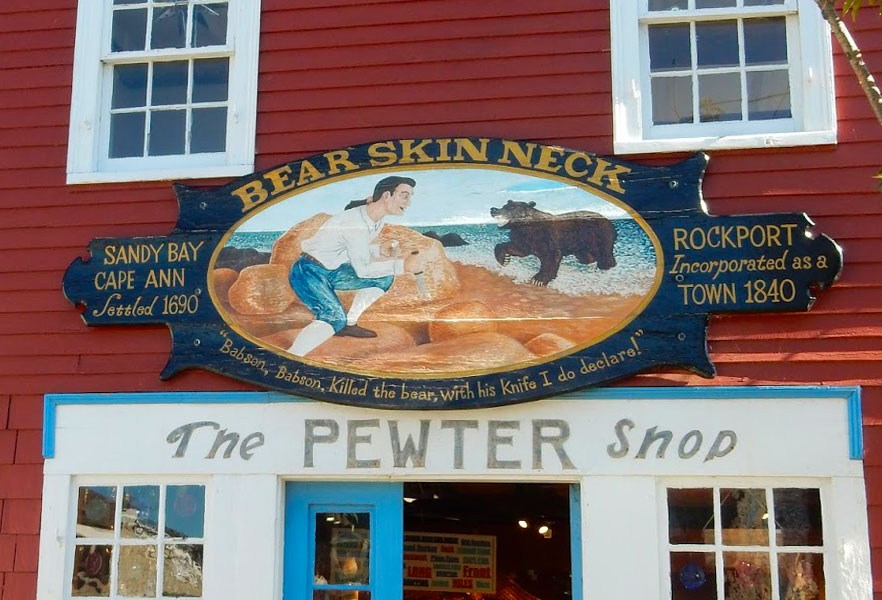 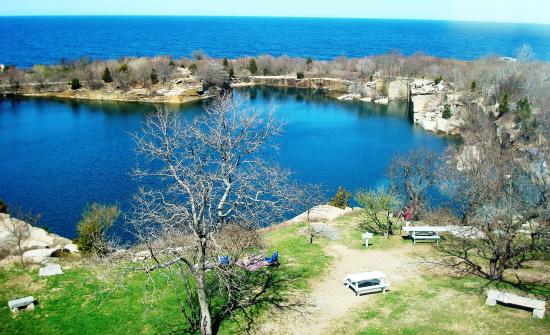 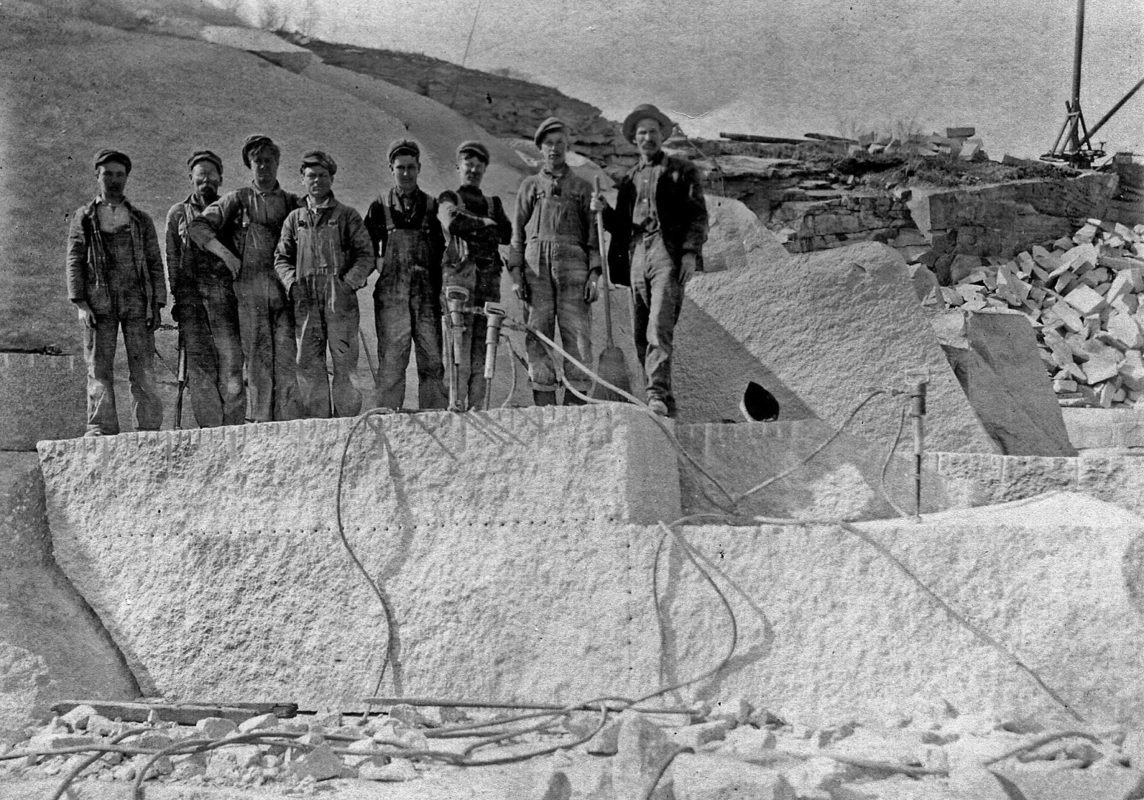 If you are visiting Rockport, one place not to miss is the Halibut Point State Park (formerly the Babson Farm Quarry). Trails, ledges and tidal pools make this an ideal spot for a picnic or site seeing with expansive views of the Atlantic. On a clear day, you can see the islands of Maine!

There is a self-guided tour that highlights the eco-system and the history of the park. It was an active quarry starting around 1840 owned by the Babson Family and sold to the Rockport Granite Company and mined until the collapse of the granite industries in 1929. These same stone cutters were the ones hired by Roger Babson to forge the famous mottos on Dogtown’s Babson Boulders.

Eventually, the state purchased the land that was a Babson homestead to create Halibut Point State Park which has been referred to as the “Gem of the North Shore”. Click here for more information.

The Babson-Alling House is a historic colonial house at 245 Washington Street in Gloucester, Massachusetts. The 2.5 story Georgian house was built in 1740 by William Allen, and remains one of Gloucester’s finest houses of the period. It is a typical house of the time, with a center chimney plan and a gambrel roof. The house was bought by Joseph Low in 1779; his daughter Elizabeth married Nathaniel Babson, and their son ended up inheriting the property. It remained in the Babson family into the 20th century, eventually being inherited by Elizabeth Alling.

The house was listed on the National Register of Historic Places in 1996. Click here to read about the Babson Historic Association’s support for this historic site 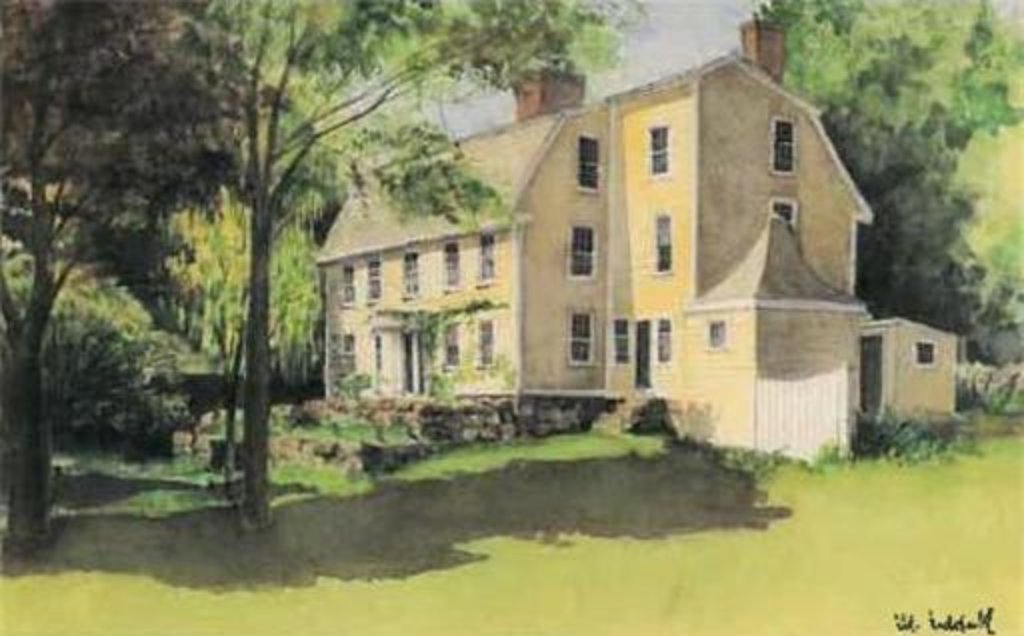 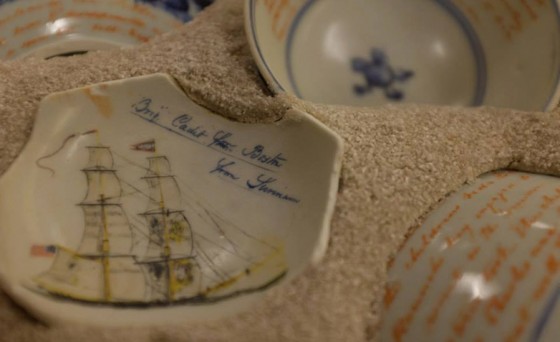 At the Cape Ann Museum, where you can explore the history and art of Cape Ann, the Babsons show up in several of the extensive exhibits and collections.

Be sure to check out the art installation in the entry level vestibule and restroom that includes text and images from the 1838 ship’s log of Capt. Edward Babson and the diary of his wife, Amanda Babson. Or, go upstairs and see the extraordinary Fresnel Lighthouse Lens from Thachers Island in Rockport in an exhibit narrated by Tom Babson.  Spend time in the gallery on the first floor devoted to the work of Fitz Henry Lane, Cape Ann’s native son and renowned marine artist,  and find his paintings of  the brig, the Cadet, owned by Babson sea merchants, The Babson Meadows at Riverdale and the Babson and Ellery Houses, all donated by Babson family members.  See if you can find Alfred J. Wiggin’s Portrait of Nathalie D. (Duley) Clough, whose aunt married Osman Babson.

Isabel Babson Memorial Library located at 69 Main Street in downtown Gloucester provides helpful books and materials to women who are pregnant or raising children. Founded in 1961 by Roger W. Babson in honor of his forebear, Isabel Babson, a nurse and midwife and the first known Babson in America.

The library is located at or close to the site of Isabel’s 17th century home and is located in a historic district listed on the National Register of Historic Places.  Read more on the library and midwifery.

Interested in learning more about Indigenous history on Front Street where Isabel lived and what she may have learned from Indigenous healers practicing on Cape Ann at the same time as she was?  Explore research summaries describing Indigenous connection with this and three other Cape Ann sites at Indigenous History of Places with Babson Connections. 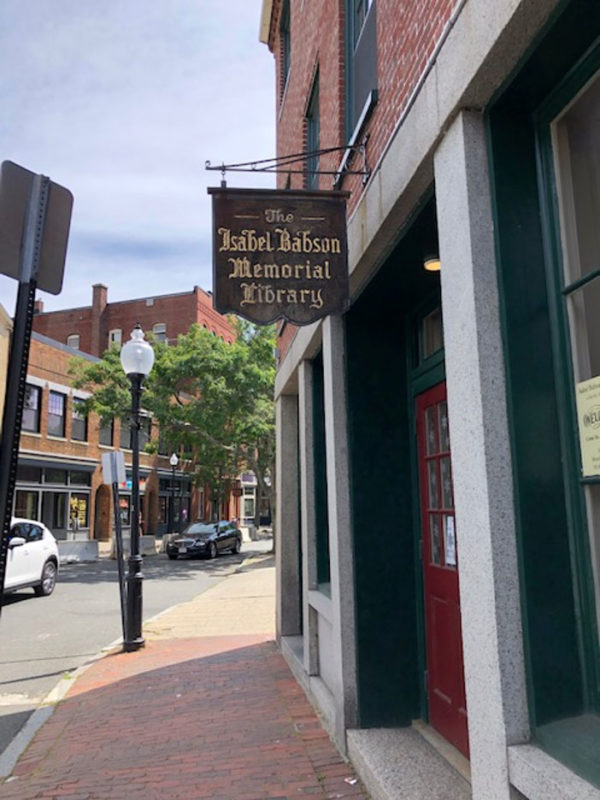 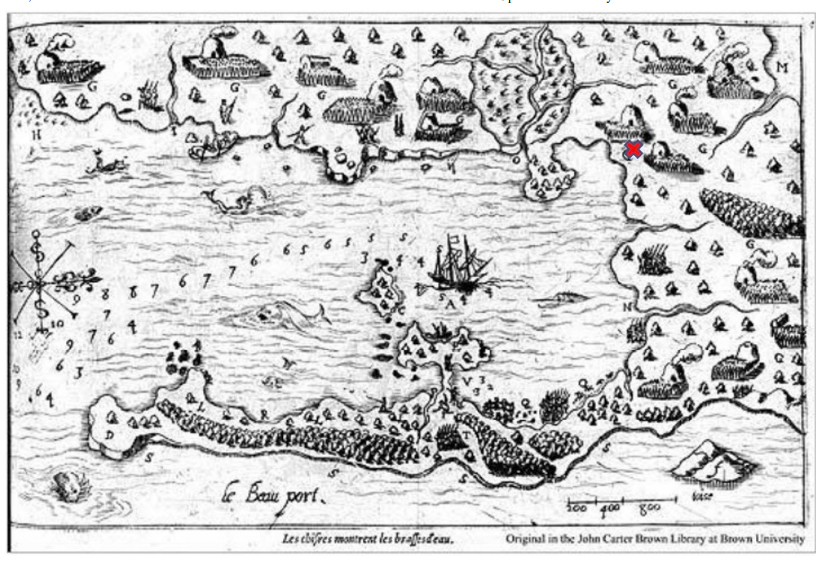 When Isabel and her son,  James Babson,  settled on Cape Ann, it was the homelands of the Pawtucket Native American people who had been living, fishing, hunting and farming there since time immemorial. Babsons lived as neighbors with the Pawtucket at a time when they were being displaced by European settlers and their history erased from colonial records. Explore research summaries describing Indigenous connection with four places: Babson Cooperage Museum, Front Street (area of the Isabel Babson Memorial Library), Dogtown and the Babson Meadows in Riverdale.

On Church Street in Gloucester, look for the classically-styled New England church built in 1806. Listed on the Register of Historic Places, it is renowned for its steeple after plans of Sir Christopher Wren and for the bell cast by Paul Revere. The Church has its origins as the First Universalist Society in America organized in 1779 and Babsons were among its founders.  It has a storied history in the annals of separation of church and state and the predecessor church was moved on to property owned by a Babson family.  For more, see here. 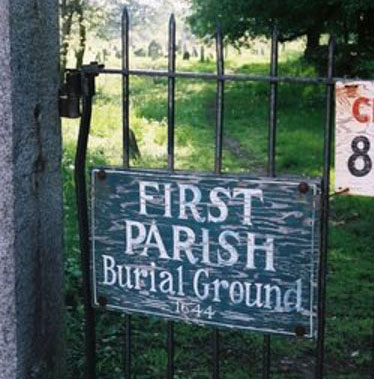 The First Parish Burial Ground, formerly known as the Old Bridge Street Burying Ground, is located at 122 Centennial Avenue in Gloucester.  It was laid out in 1644, consists of 2.5 acres and is the oldest burying ground in Gloucester.

The earliest grave is for Isabel Babson, the forebear of all Babsons in America, who died in 1661. There are at least 11 other Babsons who are buried there.  Learn more about Isabel Babson.

Oak Grove Cemetery in Gloucester, Massachusetts is the final resting place of at least 76 Babson descendants.

It was founded in 1854 by a group of six local businessmen, through the purchase of an oak grove bound by Washington, Grove, Derby Streets and Maplewood Avenue. The cemetery layout was part of the rural cemetery movement whose objective was to create internment sites in a beautifully landscaped area. The landscape architects, Robert Morris Copeland and Horace William Shaler Cleveland, took inspiration from renowned peer and contemporary, Franklin Law Olmstead, the architect of Central Park in New York City and the Emerald Necklace in Boston. They designed curving avenues within the cemetery work around boulders that dot the landscape. The Bradford Chapel, a Romanesque memorial made of Cape Ann granite, although no longer in use, still welcomes visitors at the front gates.

The cemetery now encompasses eleven acres in downtown Gloucester. Burial sites are no longer available. The cemetery was added to the National Register of Historic Places in 1975. The president of the seven person cemetery board of trustees is Matthew Babson, a trustee of the Babson Historical Association. The Association makes a small annual contribution to Oak Grove for maintenance of the walls and other structures.

The gravesites include one of the cemetery founders, Edward Babson (1811-1879), and his wife, Amanda Stanwood Babson (1811-1857), whose captain’s log and daily diary form the 2014 installation, Strong Breezes and Passing Clouds, at the Cape Ann Museum in Gloucester. Other Babsons include John James Babson (1809-1886), a local historian whose History of the Town of Gloucester, 1860 was republished at the time of the 350th anniversary of the founding of Gloucester. A Babson connection whose headstone is found in the cemetery is the well-known painter, Fitz Henry Lane (1804-1865), whose paintings form a permanent exhibit at the Cape Ann Museum . His magnificent paintings, The Babson and Ellery Houses, Gloucester (1863) and The Babson Meadows at Riverdale, 1863, are gifts of Isabel Babson Lane and Roger Ward Babson, respectively. Other Babsons include the ancestors of five current Babson Historical Association Trustees, Elmer (1874-1944) and Emma G. (1873-1954) Babson. 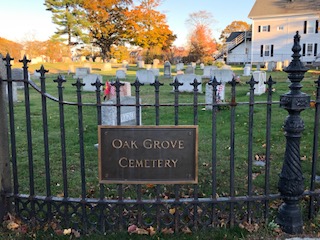 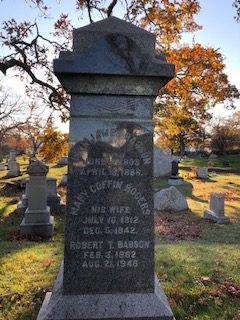